Students in Ms Loeffler's Civics & Econ course researched the election process, created their own, and ran the school's first ever Student Government election. The candidates involved made commercials, posters, fliers, and participated in a debate hosted by the C&E class. Students in the class set up the rules and regulations surrounding the election, ran the voting polls, and set up an anonymous way to tally vote. Everyone enjoyed it!

Who can join? Students elected officers for the 2017-2018 school year. Those who ran for office were offered the role of representative. (Number of members is 12.)

Requirements? Be willing to run for office; choose a campaign manager, film a commercial, and campaign.
Why? The SGA serves as the organizational group for Fall and Spring Spirit weeks. This semester, spirit week was part of the anti-bullying and anti-drug awareness week. They also led the participation of ECP-Early College students in the Elizabeth City Christmas Parade. Currently, the SGA is beginning a service learning activity to raise support for The Leukemia & Lymphoma Society (LLS). Join us in supporting LLS (click link below): 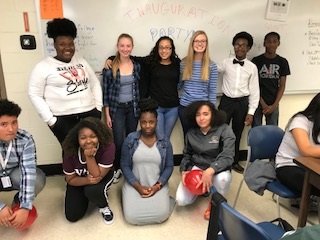